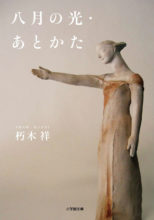 August Flash is a trio of linked stories: “The Doll’s Face,” “The Stone’s Memory,” and “The Water’s Silence.” On August 6, 1945, seventy thousand people in Hiroshima died instantly due to the atomic bomb. In each of these stories, the main character loses a loved one and observes scenes like hell itself. An inscription at the beginning reads, “For those who survived.” By following each character through August 6 and succeeding days, the author probes what it is to lose something irreplaceable, yet somehow live on. The August Flash stories appear with two further works in this Hiroshima seventieth-anniversary edition. <Miyakawa>