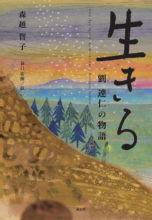 ーThe Story of Ryu Renryen

Ryu is kidnapped from China and forced to serve in a Hokkaido coal mine during World War II. He escapes and lives alone in the forest for years, before being found on a snowy mountain in 1958. For thirteen years, he has survived by his wits in harsh nature, unaware of the war’s end. This nonfiction book tracing half of his life is unique in Japan, in that it clearly describes the Japanese regime as an aggressor. Through Ryu, we learn there were people robbed of dignity and of much that gave their lives meaning. <Sakuma>