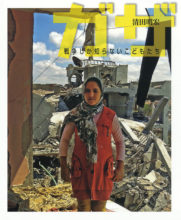 ーChildren Who Only Know War

In the Eastern Mediterranean, the part of Palestine called Gaza has 1.8 million residents but has endured destruction due to conflicts with Israel. Many Gazans have lost their lives; survivors live surrounded by eight-meter high walls, as if in an internment camp. The author of this book entered Gaza as a worker in UNRUWA, a United Nations agency charged with helping Palestinian refugees. He shares the stories of children he met who have only known war, portraying their daily life through text and photos. <Nogami>