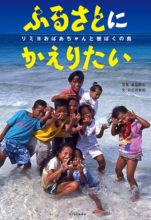 Longing For My Home Island

ーA Story of Nuclear Refugees in the Marshall Islands

This photo-documentary picture book shows what happened to the residents of Bikini Atoll after the U.S. government finished holding nuclear tests there in the 1950s. A woman named Rimiyo, who was thirteen, suffered radiation sickness and could not return to her home island. Moving among other islands according to U.S. orders, Rimiyo continued to miss home. The scourge of radiation that remains on her island even after sixty years, and Rimiyo’s wish for nuclear disarmament, come through clearly in this book. <Nogami>