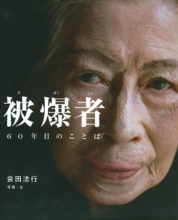 In 2005, sixty years after atomic bombs fell on Hiroshima and Nagasaki, six people who survived the radiation were photographed and interviewed. This book introduces each of them, including Hara, who continues to draw the A-bomb dome, Yamaguchi, who in 1982 told a UN conference, “No more Hiroshimas, no more Nagasakis, no more nuclear bomb victims,” and Kataoka, who shares her past despite undergoing operations to treat the keloid scar tissue on her hands and face. Their eyes express an ardent desire for peace. A sequel came out seventy years after the bombings. <Doi>