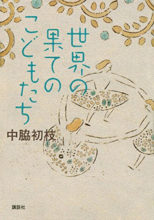 Children at the Edge of the World

This novel of World War II follows three women who meet as children in Japan-occupied northeast China. Tamako is a Japanese from a poor village. After the war, she gets separated from her family as they leave China, and she grows up an adopted Chinese. Mari is a Japanese born to a rich trader. She becomes orphaned in bombings in Japan. Mija is a Korean who used a name given by Japanese occupiers. After the war, she goes to Japan and faces discrimination. By giving three viewpoints, this novel shows how the same people can become both aggressors and victims. <Sakuma>