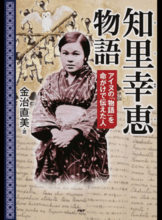 ーThe Girl who Gave Her All to Tell the Ainu Stories

Born in 1903 in Noribetsu, Hokkaido, Yukie Chiri belonged to the Ainu, the indigenous hunter-gatherer people of Japan. She grew up on Ainu legends told by her grandmother and her aunt. Defying ethnic discrimination, she studied Japanese. Inspired by the linguist and ethnologist Kyosuke Kindaiichi, she used the Japanese writing system to record her people’s legends both in the Ainu language and in Japanese translation. She died at age nineteen. This book graphically portrays Hokkaido during Chiri’s life and the significance of her legacy in preserving Ainu culture. <Doi>