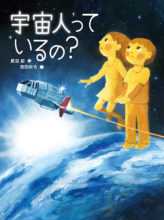 Two children ask their father if there are living creatures elsewhere in the universe. Basing his observations on scientific fact, their father first tells them about life on Planet Earth and then explains how the existence of active volcanos under the oceans on moons orbiting Jupiter and Saturn may indicate the presence of living organisms. The children and their father then tackle the idea of life outside our solar system and imagine what forms organisms would have to take in order to survive. The author is a biologist, and his firm grounding in science makes his visions of creatures on different planets fascinating. <Doi>