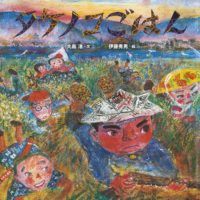 A well-known film director, Nagisa Oshima, describes an experience from his childhood during World War II. One day he and his classmates went to bid farewell to their teacher, who had been drafted and would soon leave to fight. The teacher served them all rice cooked with bamboo shoots. As they ate, a boy who had not cried since his father died in battle, suddenly burst out sobbing and pled, “Teacher, don’t go to war!” Oshima, who had believed until then that the war was right, began to doubt what he had been taught. <Sakuma>